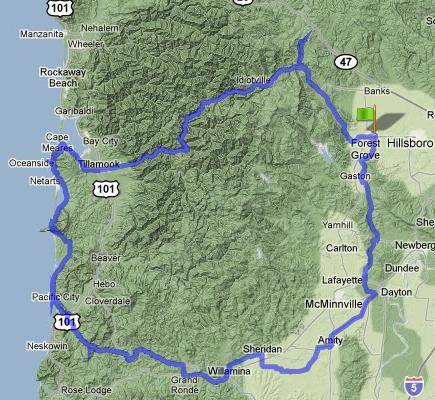 The weather forecast was not good. March has been very unkind to Oregon, and the expectation was for more rain. I was prepared to ride all 186 miles in rain.

Joanne and I spent the night in Forest Grove, the hosting city for the Oregon Randonneurs Three Capes 300k Brevet. When we woke up, we saw what we expected – rain.

I rode the short distance to the Grand Lodge and found Susan underneath her rain shelter. I registered and then headed to the lobby where I found a large number of riders waiting to get wet. They did not look chipper.

We rolled out at 6:00 am into rain filled streets of Forest Grove. I choose a medium pace. This was to be a long ride and I needed to conserve energy in order to finish. My ride plan was simple, ride at a consistence but easy pace for the first 100k, and then back off for the next 100k which would be in a strong headwind along the coast. Finally, pick up the pace and ride hard for the last 100k.

I let most of the folks ride off in front of me as we headed out toward Highway 6 which would take us to Tillamook. But first, there was a short but intense side trip up Timber Road to a control. This gave me the opportunity to see just how many riders were in front of me. There were a lot.

I quickly had my brevet card signed and started the return back to hwy 6. There were not many riders behind me. But I was surprised to find Mike Bingle to be the very last rider. Hmmm, he must have slept in.

Returning to hwy 6, the rain that had been my companion stopped. I did not worry, knowing that it would be back.

The climb up to the hwy 6 summit was not difficult. I kept and even pace and slowly wound my way up. Nearing the top, I could see bits of blue sky above the summit. Knowing better, I allowed myself some hope that I would not ride the entire day in rain, that the sky along the coast was clear. I put these foolish thoughts away as I began the long descent.

Traffic was light as who would want to go to the coast when the weather was expected to be so bad. I slowly caught and passed several riders as I approached Tillamook. I even saw a small group stopped for a restroom break.

In Tillamook, I used a small bakery for the control. I was there just long enough to use the restroom, fill my water bottle and consume a Balance Bar, my new favorite energy bar. Then I was off to ride the Three Capes Scenic Route.

The first part is perfectly flat along Tillamook Bay. Then comes the Cape Mears Climb, a steep climb with grades at 10%. I kept to my ride plan and did not attack. I got in touch with my inner chain ring slowing working my way to the summit. I also took the descent easy. We had been warned about pot-holes and I saw and avoided several. The sky remained clouded, but the promised rain stayed away. Perhaps my hopes would come to pass.

Upon reaching the coast line and turning south, the sky was amazingly more blue than grey. I stopped for a photo and discovered that my front tire was going flat. It had some distance in it, so I limped along looking for a good non-muddy place to change it. It was then the Mr. Bingle appeared. Yes, he had slept in thinking the starting time was 7:00 am, not 6:00 am. Even so he was chipper and we shared a few words before he dropped me. 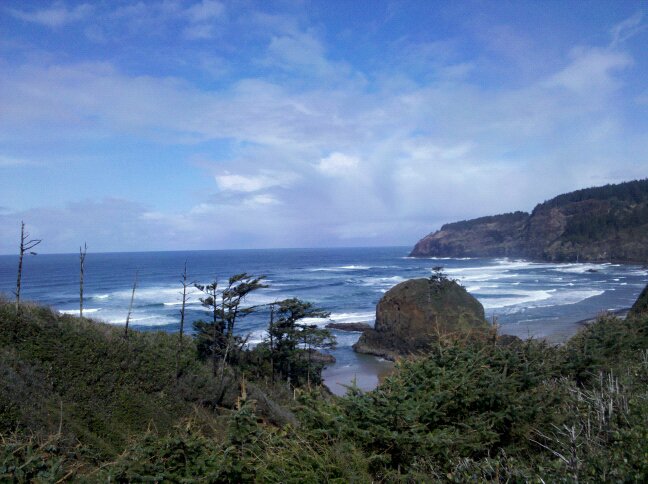 Just as I finished fixing my flat (it tool a long time to find the issue and boot it), Lesli and Sara came along. I decided to join them for the ride into Pacific City. Sara is the quite one, Lesli is not. Lesli is not afraid to ask questions to get to know you and I enjoyed the conversation. It made the head winds tolerable and even fun.

At Pacific City, we stopped at Stimulus Expresso where I enjoyed a bowl of Tomato Bisque soup and a Latte, along with some time off of the bike. The three of us left together and climbed Sourgrass together. Here, fellow Salemites Tim and Bruce passed us, and nearly caused a ‘meet the pavement’ moment then thier wheels overlapped. But Bruce’s bike handling skills prevailed and all was well, if not exciting.

Sara, Lesli and I continued onward and upward to the Sourgrass summit and then descended down to the Grand Ronde Market and it’s amazingly clean restroom.

There, at the market not the restroom, Tim and Bruce asked me to join them and I consented as it fit my ride plan. The three of us took off with an amazing tail wind and rode the last 60 miles at a very quick pace. The only rain we saw was when we were inside the market at the Chevon Station in Amity. While we were warm and dry inside, it was pouring outside. But it was a very short shower and we did not have to wait for it to end.

An analysis of my split times shows that I held to my ride plan very well, though I though my average heart rate would have been higher for the final split to the finish – we were working very hard.

Clear sky, warm temperatures and dry roads turn into rain, cold and just plain wet. Well, truth be told, it did not rain the entire ride. Well, to be completely honest, we hardly had any rain, but the difference between the two nights was striking.

Jim, Jean, Joanne and I did the Windsor Island loop counter-clock wise and had a great time. I road at recovery pace.

It’ March. And March in Oregon can be ugly, real ugly.

But tonight was an exception. I intended to ride the trainer tonight, but the weather was so nice I just had to ride out of doors.

So I joined the Scott’s Cycles shop ride.

So, I hung in the back of the pack of the medium group and sure enough, a couple of riders peeled off. I joined them and had an enjoyable ride!

I chose not to ride in the rain today. Some of the group did, and others drove to The Dalles and rode on wet roads, but dry skies. I drove home.

As soon as I left the Gorge, the rain stopped. From Troutdale to almost home, it was dry. But as soon as I left the freeway and headed toward my house, it started to rain. So I climbed on the trainer and rode it for two hours. I watched the 2004 Liege – Bastogne – Liege and whenever there was a hill, I shifted down and worked hard, just as if I was climbing the same hill.

Of course there were small differences, they were must faster than I, and my bike was older then theirs. None the less, I had lots of fun.

I planned to join Columbia Gorge friends for a long and hilly bicycle ride today.  Long and hilly is what I like and I was really looking forward to the suffering.
I loaded up my Colnago and drove to Hood River only to find that it is raining.  What to do?