Joanne and I have always done the Jack Frost TT on our tandem. However, she had a unbreakable commitment so I was left to race Jack Frost for the first time by myself. This would also mark the first race for the Felt S32 Time Trial bike I purchased used late last year.

Knowing that my start time was at 10:38:30 am, I began my drive up to Vancouver shortly after 8:00 am. This gave me a good two hours to socialize and prepare. The morning was sunny but just as I drove into the race area, I encountered fog. I parked in the north parking lot next to Rick and exited my van to a very cold morning. I soon put more clothes on.

I started my pre-race checklist: confirm start time, visit the port-a-potty, set up the bike on the trainer, get dressed and lay our my final clothing (helmet, sun glasses, etc). While I was doing the checklist, I ran into many friends old and new and visited. As I wandered about, I saw that the fog was lifting and I was pleased.

Soon it was time to begin the warm up procedure: get on the bike and slowly bring up my heart rate, consume about 300 calories, and then raise the heart rate to 85% of race pace. Then, with just under ten minutes to my start time, I got off of the bike, put the trainer into the van, and finished dressing for the race. I rode over to the start and confirmed I had six minutes so I did one quick, hard warm up sprint before returning to the start. I was back with just one minute before race time.

Ten…five, four, three, two, one and I was off racing. I started chasing my 30 second man and brought my heart rate up above 155 bpm, my race pace. Soon, I was at the first of four turns, the hard right-hand turn just past he finishing line. I took it at speed and I did get out of the aero-bars. I nearly crossed the center-line, but kept the bike inside by less than six inches. Now, I had six miles to ride until the turn-around. I could see my 30 second man in front of me, but I did not seem to be gaining. Oh well, I was riding hard and just within my limits.

About one half of the was to the turn-around, I was passed by Joe Rothery. He offered encouragement as he passed, and I did try to keep him insight, but he slowly pulled away. No one else caught me before the turn-around.

The turn-around was smaller than I remembered, and I had to slow more than I wanted. I dropped down to eight miles per hour, but once I made the turn, my power output went up to over 400 watts until my speed came back up. But, now I found I was facing a slight head wind. My speed dropped every so slightly while my power output raise slightly as I attempted to maintain speed. I realized that the return was going to be harder.

After the turn-around, I saw that there were two riders just behind me. I knew that they were going to pass me, so I tried to make it as hard as possible for them. One went by me very soon and fast, while I did manage to hold off the second for some time. But it was hopeless, and he also passed me. I fought to keep him within sight and surprisingly, I was successful. I could see that he was gaining on a rider, so my goal became to pass that rider too. It was hard, but having a rabbit always helps and I passed him well before the finish.

Soon that I came to the last turn of the race, a hard left turn that I took in my aero-bars and began my sprint for the finish. 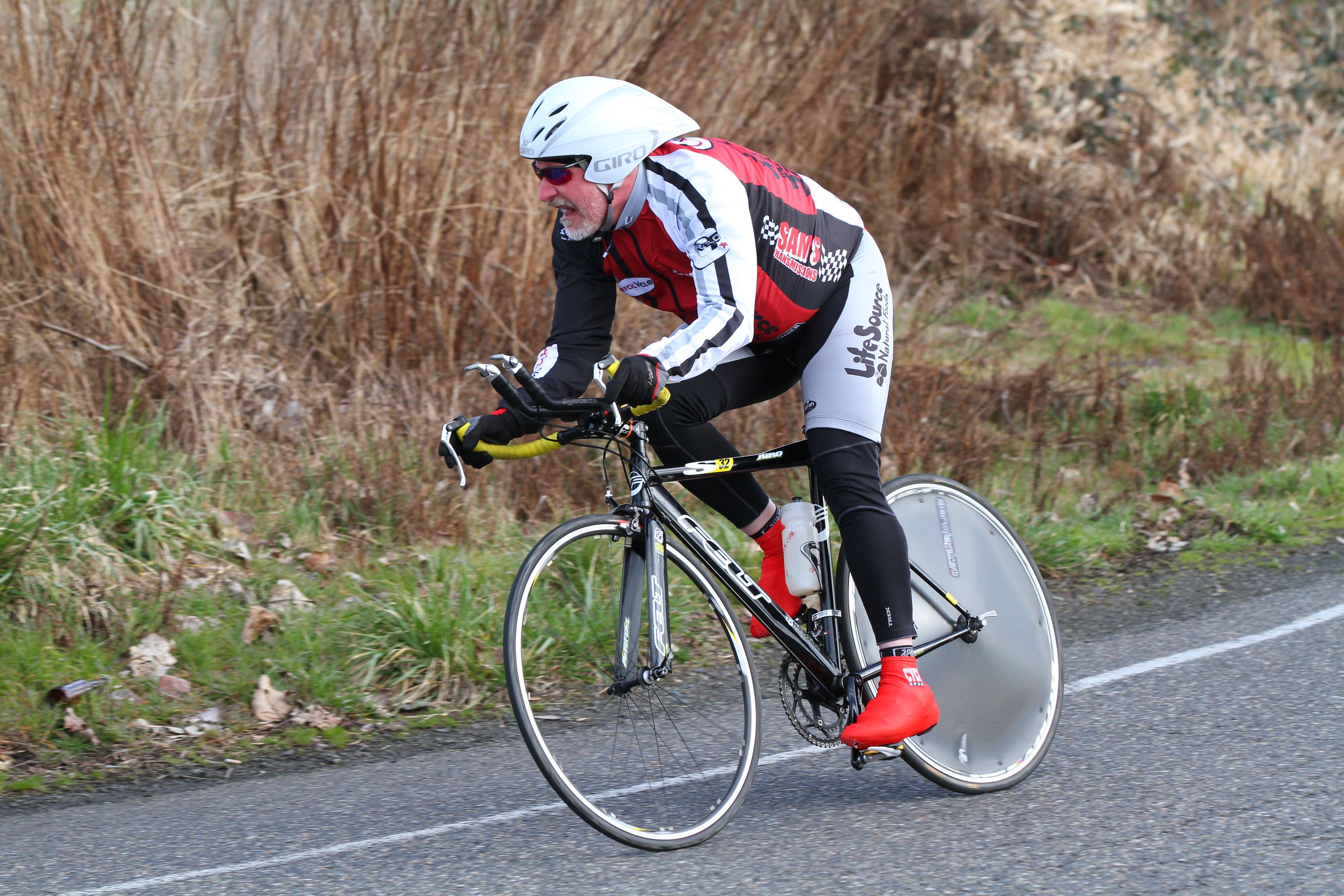 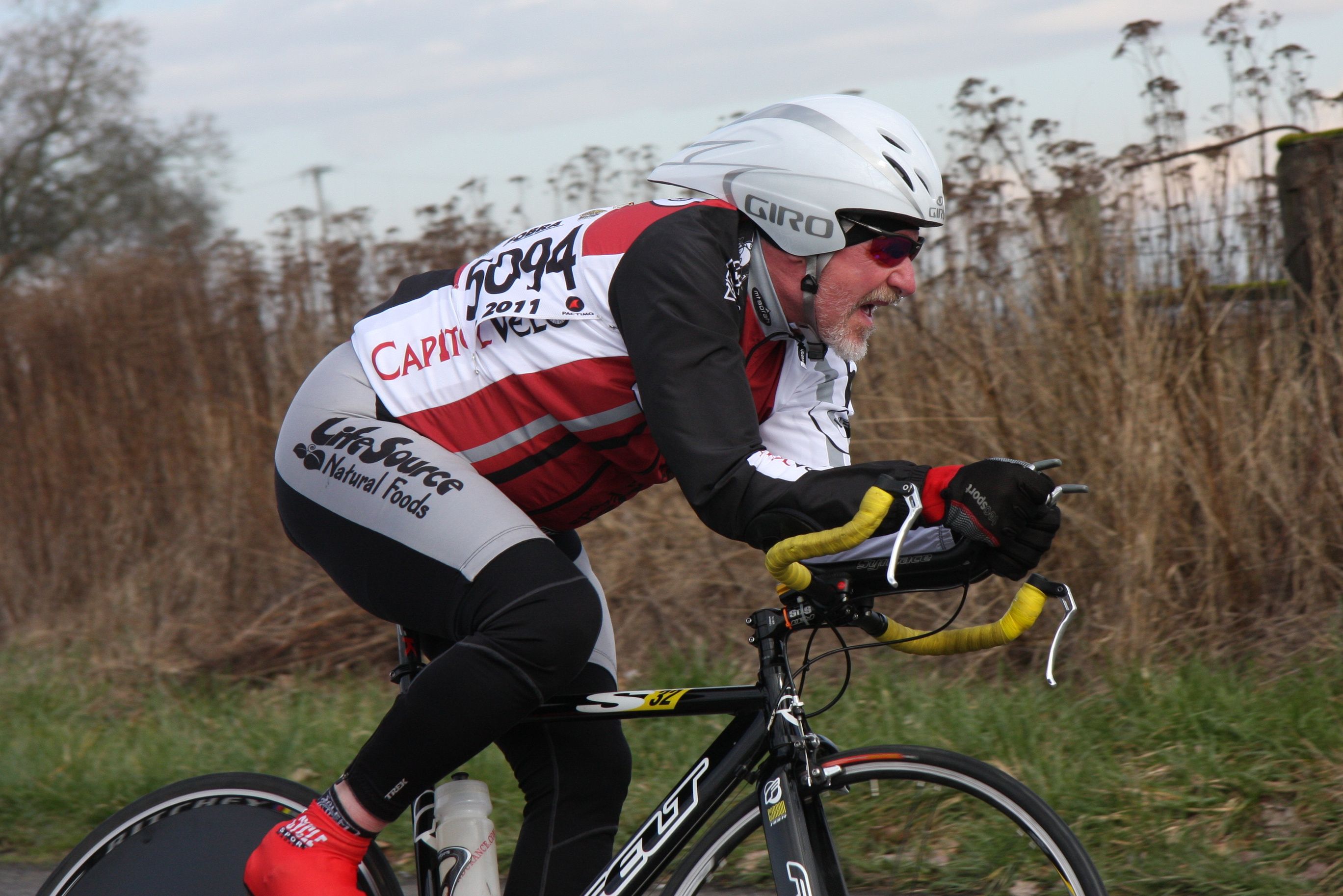 Other blog postings about the Jack Frost
Wookiebiker 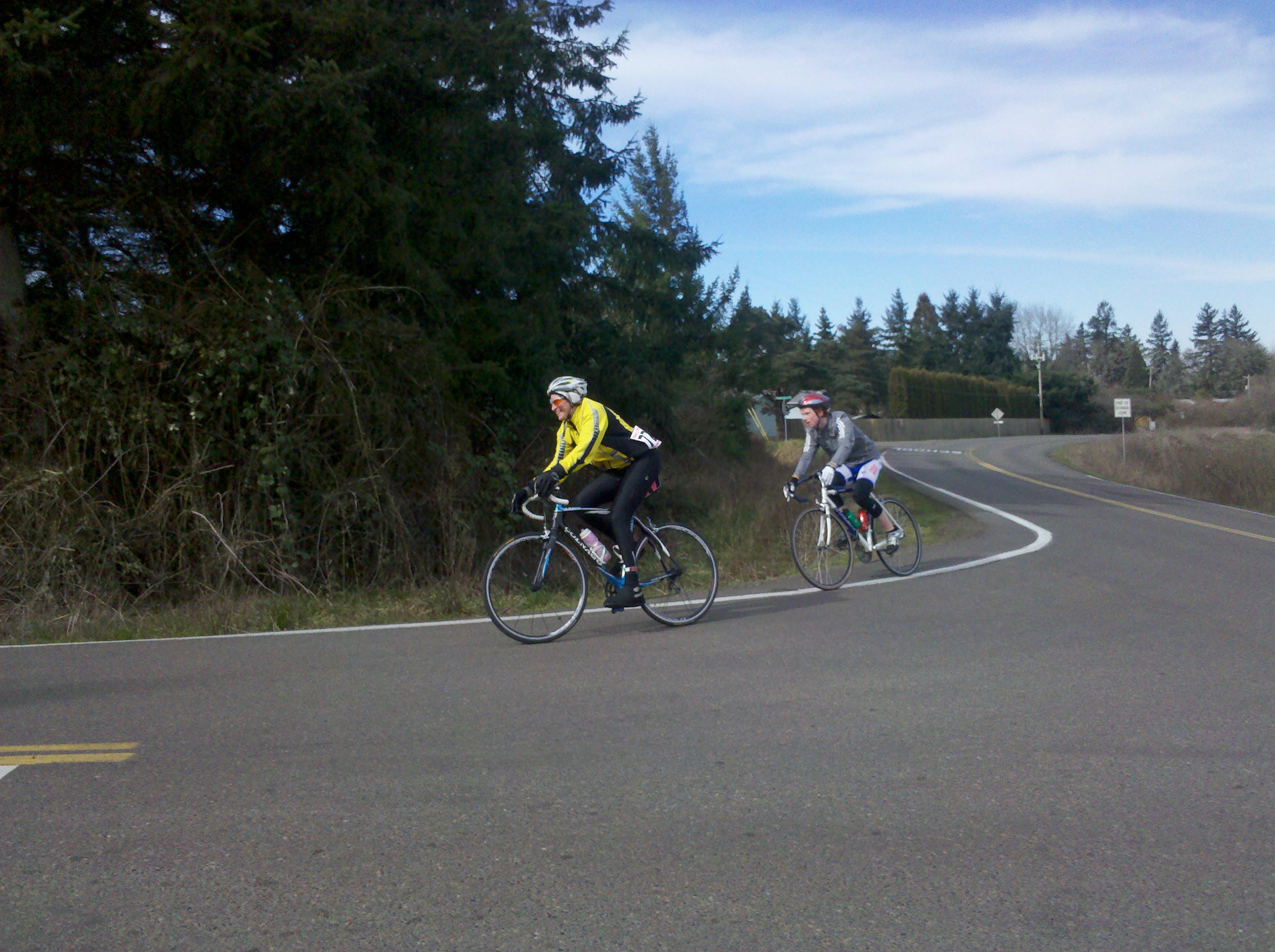 My lovely wife Joanne participated in her very first official bicycle road race today, the Cherry Pie. She started with the category 4, masters 40+ and masters 50+ women and she did not come in last. As you can see by the smile on her face, she was very happy and having fun.

My first race of the year, the Jack Frost Time Trial, is two weeks away. Perhaps I should take it out for a test ride. Also, the afternoon was warm and sunny!

I did a short but intense ride on the Windsor Island Loop.

I did the loop clockwise. I left my home and headed south on Wheatland Road to River Road to Lockhaven Road. That was my warmup. Once I made the right turn onto Lockhaven, I road as hard as I could for 6 1/2 miles to the foot of Revena hill.

Last October, Kevin “Desert Coyote” Van Dyke raced The Furnace Creek 508, 509.8 mile race through the deserts of Southern California. I was honored to serve as his crew chief. Today is his birthday, and he was hosting a bicycle ride. I just had to go.

Seventeen of Kevin’s friends started out on a almost drippy day. The sky was cloudy but nothing was falling. However, the roads were wet from overnight showers. I had decided to ride the rain bike and the fenders came in handy.

The route headed south across the Boone (I-5) bridge and then along the Willamette river to Butteville, Champoeg State Park to the small town of St. Paul. From there, we continued southward to Waconda Road where we turned eastward to Howell Prairie Road where we turned to the north past Bauman Farms, the town of Woodburn and finally back across the Boone bridge to Willsonville.

The group was friendly and lively and of varying capabilities. A small group broke away on Butteville Road. I managed to close the gap and hold their pace, for awhile, before I dropped off of the back. I then took it easy and road at the back of the pack for most of the rest of the ride.

On Howell Prairie Road, I had my first flat of the year. I limped into Bauman Farms and fixed it in their parking lot.

I finished with 57 miles and then celebrated Kevin’s birthday with cake in the local watering hole.

Jim, Jean, Dale, and Roland joined Joanne and myself on a relaxed Wednesday night ride.

We were glad to have Roland back with us; he work has kept him busy and away for several month.

My average heart rate was 93 beats per minutes and I did 25 miles in the same amount of time that I did 37 miles yesterday.

Tonight, the air was clear and cold. I wore three layers, including the ‘super soaker’, the heaviest jacket I own. It was needed. Because the wind was out of the north, the group concensious was to ride south beyond the south Salem Hills, thinking that the hills would block the wind. Good theory, but theories often fail when put to the test.

The route south took us up and over 36th Ave and Wiltsey Road – both short but steep. I did drop off of the back, but I managed to stay close enough that I could close the gap once the incline ended. I guess I have to give credit to the wind.

Now we were in the flatlands south of Salem. We passed Cascade High School, and headed toward Stayton, but turned toward Aumsville short of Stayton. On the flats, we felt the north wind, but as we were riding eastward, it was a cross wind and tolerable.

The group dropped me on the hills to Shaw, and there was no regroup. But I was not alone. Another rider got dropped and then her friend dropped back to join us. The three of us rode back into Salem together.

I finished with 37 miles in 2:23 with over one thousand feet of elevation gain. Even though I got dropped, it was fun.