An flat and easy ride. But, on the few short hills I rode, my legs complained loudly. I need a rest day.

This was a hard ride.

I started in the small town of Alpine. I parked the van at the local park, readied my LeMond and headed north on Bellfountain Road to Decker Road and the first real hill of the day – 1.8 miles with 375 feet of elevation gain. There would be many more hills to come.

Decker Road took me to Alsea Highway (OR 34) and the real climbing – 2.6 miles and 707 feet. I bypassed Marys Peak Road and descended toward Alsea. However, once I reached the bottom, I turned around and climbed back up the way I just came – 2.1 miles and 644 feet. This time I turned left onto Marys Peak Road and the steep inclines it has. Soon, I was constantly climbing at 8%, unless the incline increased to 9% and 10%. For 9.4 miles and 2,540 feet I climbed up to the view point. Thankfully, the incline lessened and there is even a small descent. The entire climb averages 5.1 percent. Climbing, I felt good; it was fun.

I continued on to Alsea, where I hydrated and fueled for the final climb up Alpine Road. I was off of the bike for a long time. I drank a V-8 and a Muscle Milk and consumed two small yogurts – about 750 calories. It was too much, and I could not ride a full power for about 30 minutes, but after that, I could ride with power. The final climb was 2.1 miles and 446 feet.

I needed a long ride with a lot of altitude gain to prepare myself for my last two races of the year. I also did not want to travel, so I devised a route where I could start from my home. Thus came into being the Mt Sheridian – Twice route.

The Mount Sheridian overlook is 2,800 feet above the Willamette Valley floor and is one of the longest climbs within riding distance. I have done the route a number of times, but never climbed up to the lookout twice in the same day. Oh, I found a challenge! 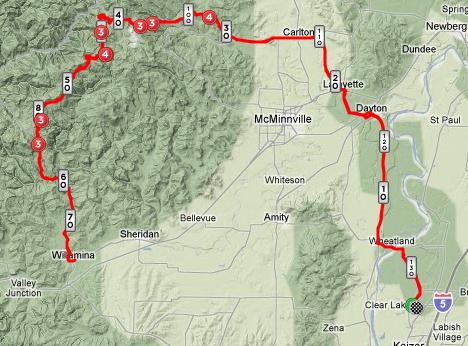 I started from home at 6:30 am and headed north to the Wheatland Ferry. From there I took OR 221 north do Dayton, and then headed toward the small town of Lafayette and finally to Carlton. At Carlton, the climbing begins, but it is not too steep but it is long. I reached the overlook at 10:30.

The descent down to Willamina was tricky. There were somewhat large rocks on the roadway, large enough that if I hit one at speed, I could have gone down. So, I had to pay special attention and keep focused on the road in front of me.

Lunch in Willamina was quick – a bowl of corn chowder, and a meet and cheese plate as I am trying a gluten free diet.

During lunch, the sun really heated things up and it was quite hot as I rolled out of Willamina. I had two 24 oz bottles of ice cold sports drink, but this proved to be not enough. Five miles from the top, I ran out of water. I soon began to suffer; my mouth went dry and I felt my core temperature rising.

I was looking for someone to beg water and found some car enthusiasts at the lookout. I asked for water, but was told that one of the cars was overheating and they had already used most of what they had. However, a sweet young pre-teen girl gave me her last 4 ounces. Such kindness is rare and I thanked her.

I descended back toward Carlton and was surprised just how hot the valley floor was. I found a mini-market and consumed 48 ounces of fluids. Yes, I was thirsty!

From Carlton, I had only 30 miles left and they went fast due to a nice tailwind.

The climb to the Mt Sheridan overlook from the north.

The climb to the Mt Sheridan overlook from the south.