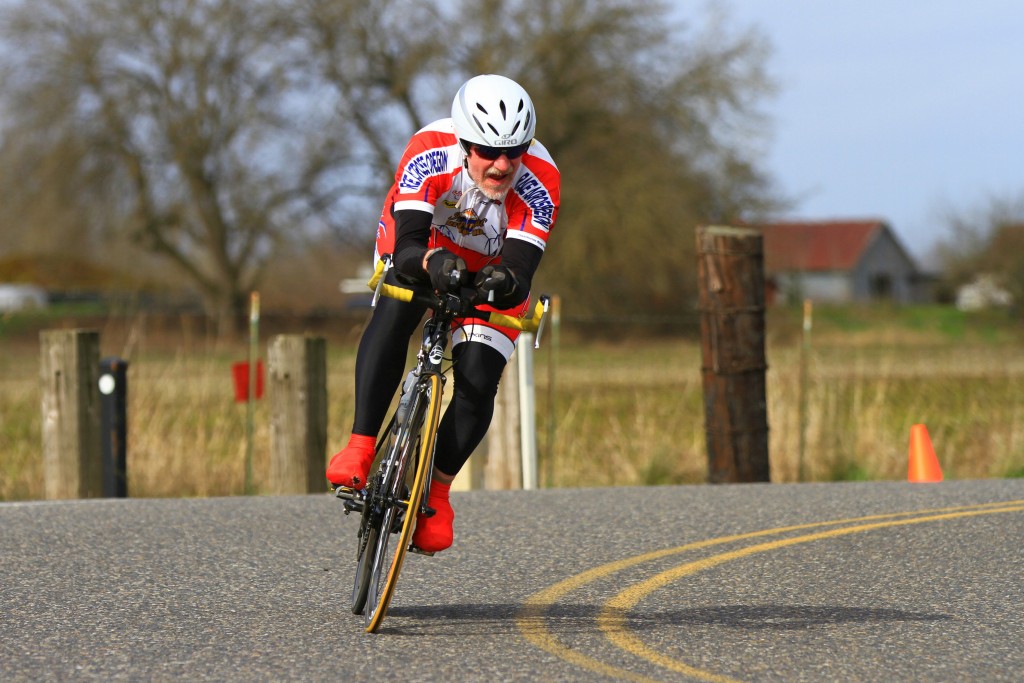 The Racing Season has Started!

Joanne and I raced the Jack Frost Time Trial in near sunny and warm (for February) weather. Joanne’s start time slipped to 10:40 so she was done way before I started. 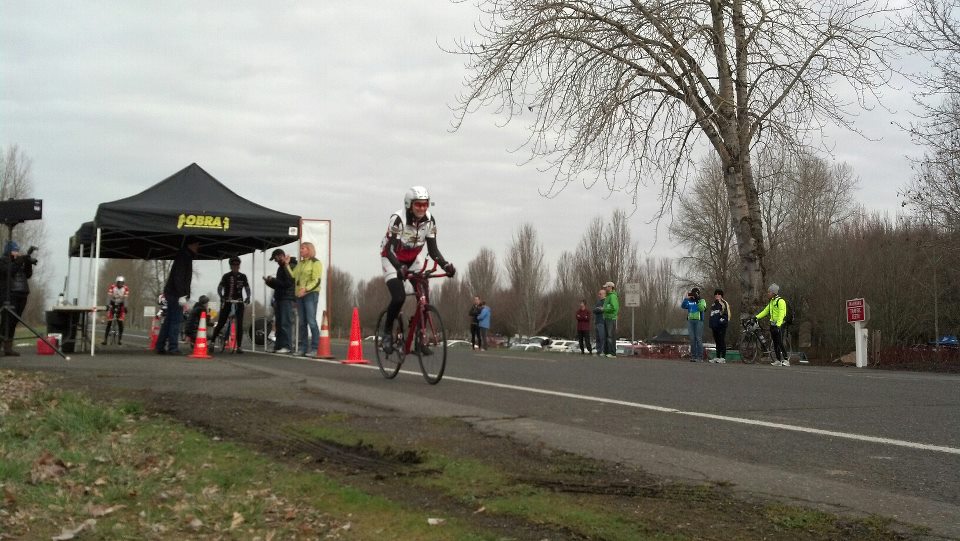 My starting time was 12:01 pm. I warmed up properly and then headed off to the port-a-potty for a pre-race visit. It was busy and I waited five minutes but it did not come available. So, I rode off to the starting line and was there the requested five minutes before my starting time. Right at 12:01 I was off racing to catch the fellow who started 30 seconds in front of me. I could immediately see I would be able to catch him and I did just after the second turn. However, that was my only rabbit; I could not see any one in front of me.

That is until I got passed like I was standing still. I tried to latch onto white kit with yellow shoe covers, but he slowly pulled away from me. As such, I had only myself to race until the turn around. As I approached it, I saw three riders who had just made the u-turn and so I knew I would have some rabbits to catch on the way back. And I did. I catch two of them, but the third I never saw again. 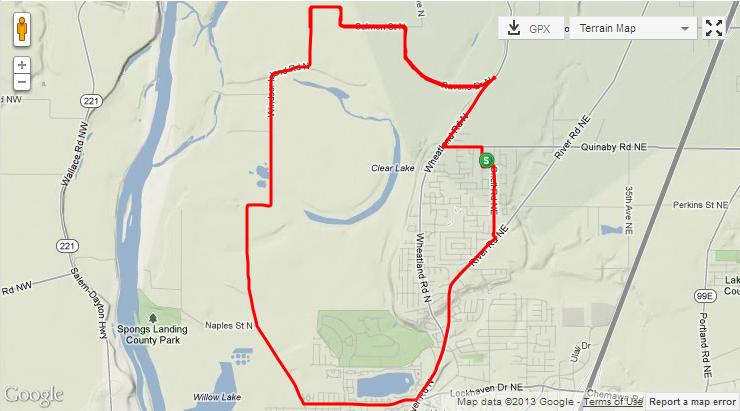 Next week is the Jack Front Time Trial so today I did a Time Trial Practice ride. After warming up, I rode at TT pace for five minutes and then easy for five minutes. After that, I did five intervals that ended with practicing a 180° turn with the acceleration afterward.

I have not ridden the time trial bike since last summer. Leaving the house, it surprised me just how twitchy that bike is! But, I soon adjusted and by the end of the ride I was very comfortable riding hard on it.

I am very glad I did this practice ride as I feel much more confident. I am going to have fun!

Another Sweet Spot interval night. I really tried hard to keep my power output within the ‘Sweet Spot’ range, and I was almost successful. Tonight, my average power output during the intervals was below 200 watts. I also manged to do four intervals, one more than last week. 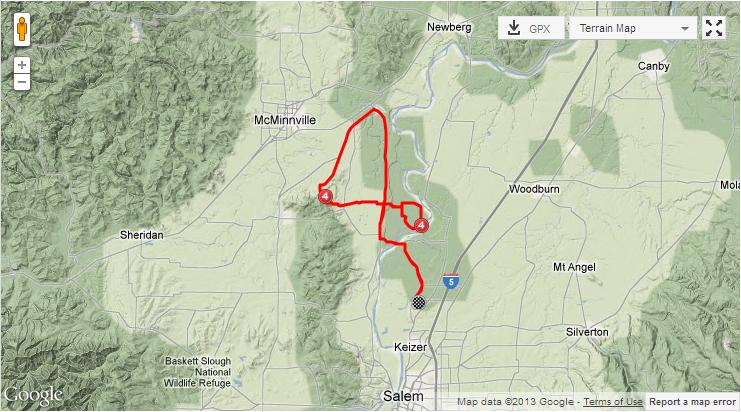 Woke up this morning feeling better. Taking yesterday off was a good idea.

I know this is February, but I am ready for Winter to be over and Spring to begin. I want to see Daffodils! I was hoping for some sun on today’s ride, and I did see my shadow – but only for a few minutes. Most of the time it was cloudy and there were some wet roads I had to ride.

I headed north from home and crossed the Wheatland Ferry into Yamhill county. I rode north to the Grand Island junction where I turned toward the island. Once on the island, I did the loop clockwise. The found the road surface narrow, rough and covered with rotting leaves in places. The unpaved section was very rough with large water filled pot holes. This loop will be the route for the Heiser Farms Grand Island Road Race in a couple of weeks. This should be a fun and challenging course. No, I will not race it.

Leaving Grand Island, I continued north to the small town of Dayton and stopped at the Block House Cafe. Before I could sit down, I had to grap a towel and walk outside to wipe the road grit off my back side. I should have ridden the rain bike instead of the fenderless LiteSpeed. I enjoyed a small latte while the locals kept and eye on me.

Leaving the cafe, I needed a bit more miles/time of the bike so I headed toward Amity, but I never made it. Along the way I decided to ride Walnut Hill also known as Valley View. This is short 0.9 mile climb that averages 8.1% and climbs 500 feet. I intended to climb at and easy pace, but none the less, I set Stave personal record. I really must hit this hill hard some day.

I returned home via the Wheatland Ferry and got in the planned three hours.

After my ride, I went to the gym to do a “make up” workout. I walked on the treadmill and then did my strength routine. It was hard and I was a bit tired after my three hour ride, but I got it done and felt pretty good afterwards.

Woke up this morning feeling weak and tired. I was going to ride, I really was. I laid out the cycling cloths and when I went to fill my water bottles, I knew riding was just not going to happen. Went back to bed and slept til noon.

I am planning on racing the Jack Frost Time Trial at the end of this month, so my Coach John Hughes scheduled an “Intensity” workout. I took full advantage of it. John wanted me to ride at an intensity of 181 to 199 watts. I should have, but I did not. My three intervals average 246 watts.

Again, I must learn how to restrain myself.

My coach John Hughes has me do “Sweet Spot” intervals once a week. These intervals are at a effort are intended to increase sustained power and should be done between Zone 3 Tempo and Zone 4 Sub threshold. Today, I rode a bit harder than I should have and I managed to do only three intervals instead of five.

I must learn how to restrain myself!

Finally getting over my illness. No more meds, no more stuffy nose and no more body aches. Plus, the weather has improved. Gone are the sub-freezing temps and fog. Today was to be mostly sunny and approaching 50 degrees. Time to ride the bike.

I broke out the Colnago CT2 for todays ride. It has been a long while since that bike got out to play and it really had fun today. My training plan called for an easy two hour ride so I hooked up with the Salem Bicycle Club. We headed east and I hung back with the slower group. But then the quicker group, including my wife, got a stop light ahead of me so I picked up the pace to bridge up to them. For ten minutes I threw out the window the “easy” portion of the training ride and brought up my average heart rate to 144 bpm and average power to 197 watts. Once I caught them, I backed off for the rest of the day.

We turned to the south on Howell Prairie Road and then rode into the fog, It was thick and did not look like it was going to burn off anytime soon. We climbed up the hill to above Maclay and the fog persisted. I continued on to Shaw and saw that it was time for me to return. I left the group and headed back down the hill to Salem and then to home.