It is Race Across Oregon weekend, and I will be an official on Sunday. But, I wandered on over to the 5:00 am start where I found The Desert Coyote ready to ride. 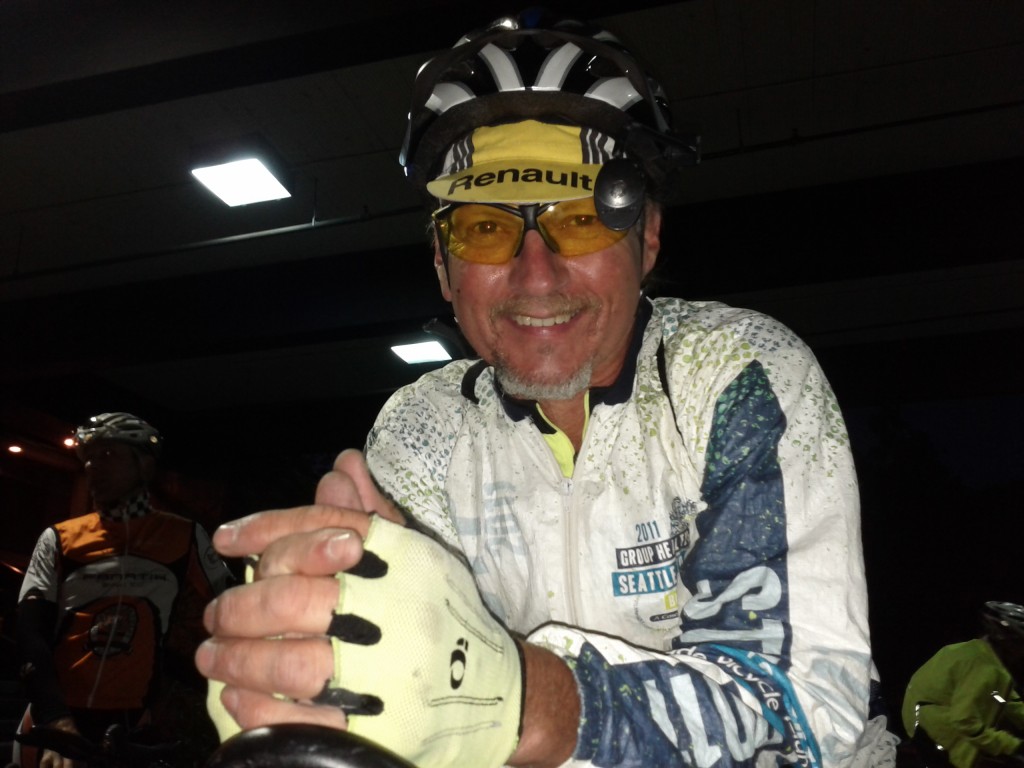 I raced the Wildcat Mountain Time Trial today.  When Mark and I arrived, we were disappointed to clouds, mist and cool temperatures. I was hoping that the sun would break through the clouds, but I would be disappointed.

I started at 10:05:30, and the climbing started immediately. I dropped down into the largest cog and still it was not enough. However, I refused to let myself shift into my granny chain ring. All too soon, my 30 second man passed me. I was breathing so hard I could not talk, but he could. Then my one minute man passed me. This started a ritual that happened all race long up to and including Mark passing me. He started five minutes after me.

After about two miles of really steep climbing, the grade lessened and we even saw some flats and short descents until the final climb to the finishing line. This was about as long as the initial climb, but not nearly as steep.

I finished at 59:09 with a 11.3 mile per hour average. I burned somewhere between 670 to 900 calories due to my average power output of 233 watts. Interestingly, I average 285 watts for the first five minutes and 256 watts for the first 20 minutes. This calculates to a critical power of 246 as per the calculator at beginnertriathlete.com.

I focused on working as hard as I could during the race, unlike my Marys Peak TT. For example, I average 190 watts on a 135 foot 1.4 mile descent.

In the end, I am happy with my effort. While it was hard, and cold, and wet, I did have fun.

The Oregon Uphill CHallenge, OUCH, is 16 miles up Larch Mountain from Corbett. I have climb this before, but never raced it, until today.

This was my third uphill time trial of the season, and I was determined not to come in last, like I did in the first two.

The weather conditions were much different than my the other two uphill TTs. Instead of cold and wet, today was hot and dry. No need for arm warmers today. I was dripping sweat during my warmup on the trainer. I went through one water bottle warming up and decided to take two with me for the race.

Unlike all of the other time trials I have done, this one used a starting ramp, just like the Tour de France, except for the crowds, and the photographers and the television cameras. Starting times were 30 seconds apart, with the only tandem, the juniors and all of the women starting in front of me. Joanne’s starting time was nearly 30 minutes before mine and I wondered if I would be able to catch her.

One by one we climbed up the back of the ramp, and every thirty seconds a rider rolled down and was off. Soon, my turn came.

I declined the TT hold, and rolled down the ramp and onto the road way. This would be a long race so I did not start off with a sprint, but quickly brought my pace up to my race pace. Soon, others began to pass me. I rode as hard as I could and was impressed with my average heart rate of 139 bpm, but I was passed by many, many others. It would be that way for the entire race. The only people I pass were not in the race but climbing the hill for fun.

After a very long time, I knew I in the last two miles. I tried to pick my pace and put my heart rate above 155 bpm and tried to hold it there until the finishing lines. I did so for the first mile, but during the last mile I tired and my effort fell a bit.

Joanne was at the finishing line cheering me, and I was very happy to be done. After I recovered, Joanne and I traded times and I found out that I was three minutes slower than her. I was happy for here, but a bit upset with myself. I can climb better than her, but not today.

Once the results were posted, I was 157th out of 160 starters. Not what I was hoping for, but I knew I had put out my best effort.