What? Another Time Trial? Didn’t we just race yesterday? What about a rest day?

No rest day for us as the Crank PIR Time Trail is on the OBRA Time Trial Cup calendar. Joanne won her division last year. She wants to defend it.

The day broke clear and warm. By the time we arrived at Portland International Race Way, the temperature was nearing 70°s. It was a beautiful spring day. Joanne’s start time was less than an hour away so we set up her Kestrel on the trainer and she began to warm up, and to sweat. A few minutes before her start time, we wandered on over to the starting line an listened to the lecture – six laps that you must keep track of yourself, no drafting, on your last lap stay left toward the finishing line and most importantly, ride hard!

My start time was an hour and one half after Joanne’s so I got to watch most of her race. She looked good, as if she was riding hard. 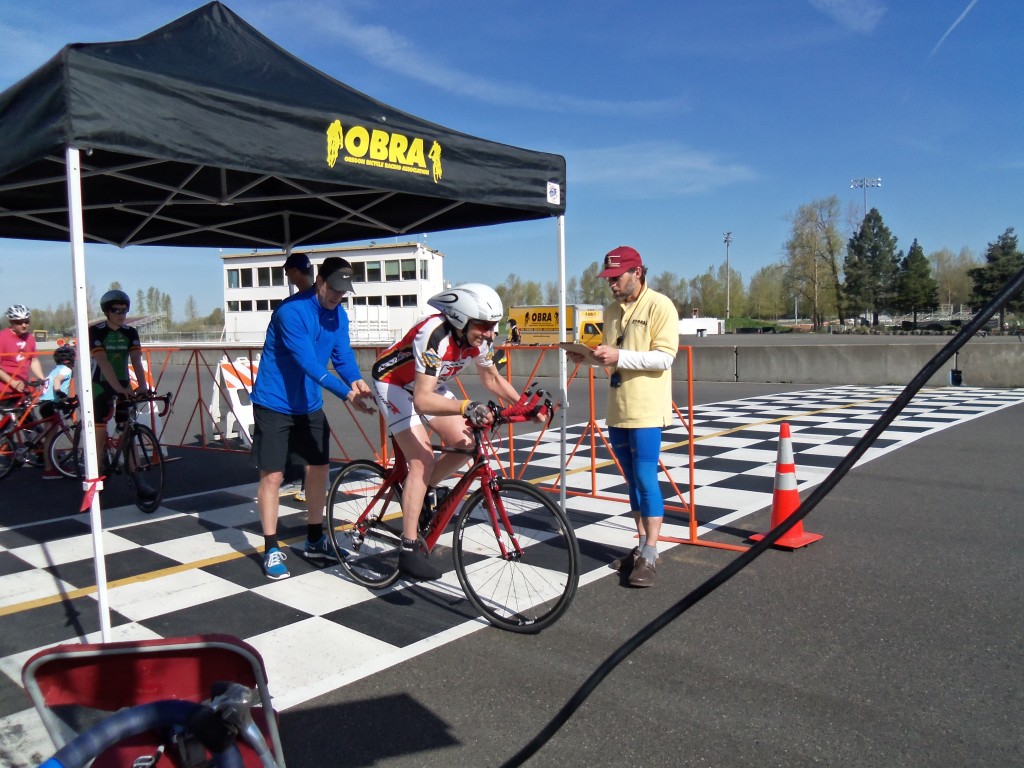 Once Joanne started, I had to begin my own warm up. I climbed onto my Felt and began to spin at a very easy pace. After ten minutes, my effort was up to 150 watts and sweat was dripping down from my forehead onto the bike and the ground. As my intensity increased, so did the sweating. Sometimes, I think the time trial warm up is harder than the actual race!

Joanne finished as I was warming up. She was happy with her effort and mentioned that there was slight head wind on the back stretch. I finished my warm up and head to the starting line.

My start had been better in the past. I opted not to be held (hey, I’m a big guy!) and I had trouble clipping in one my race started. But I only lost a second or two. Once clipped in, I accelerated down the track toward the first turn. I had six laps to race and I wanted each and every one of them to be fast. However, there are some awfully fast folks and all of them seem to be racing today, and passing me. I would try to hold on, to find a good rabbit, but this was not to be. 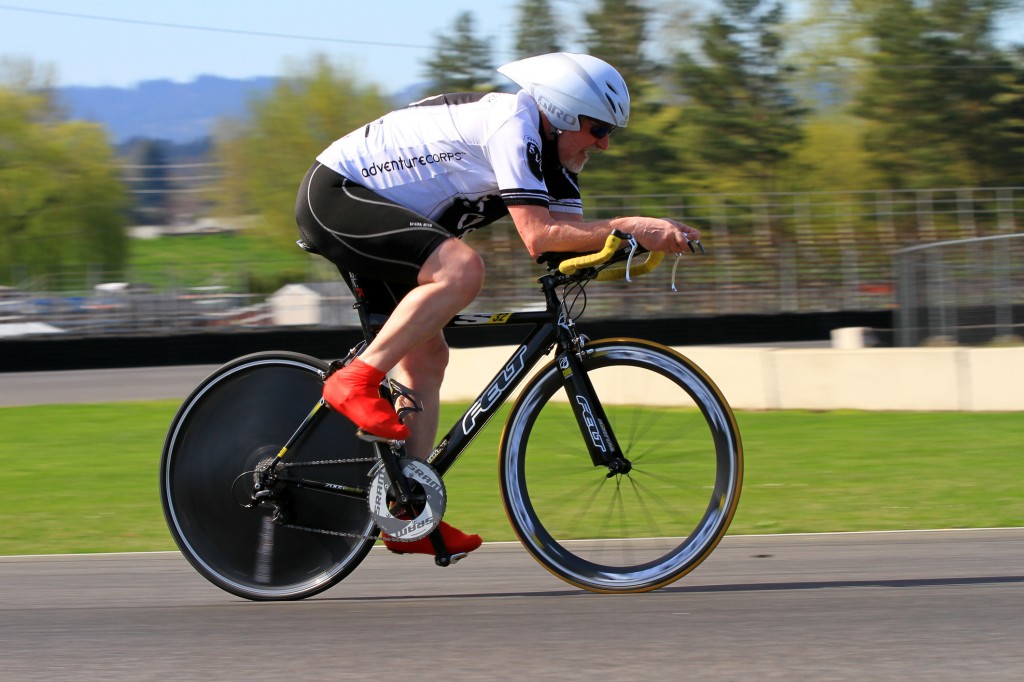 However, on my fourth lap, I did slow gain on someone. I set my sights on him and worked my way up to him. I realized that I would catch him just as we came to the only technical corner on the track. As we approached it, I saw that he started the turn way to early; his line was way off. I stayed to the right and dove down to the left below him and got around him. Now I worked even harder so he could not stay with me. 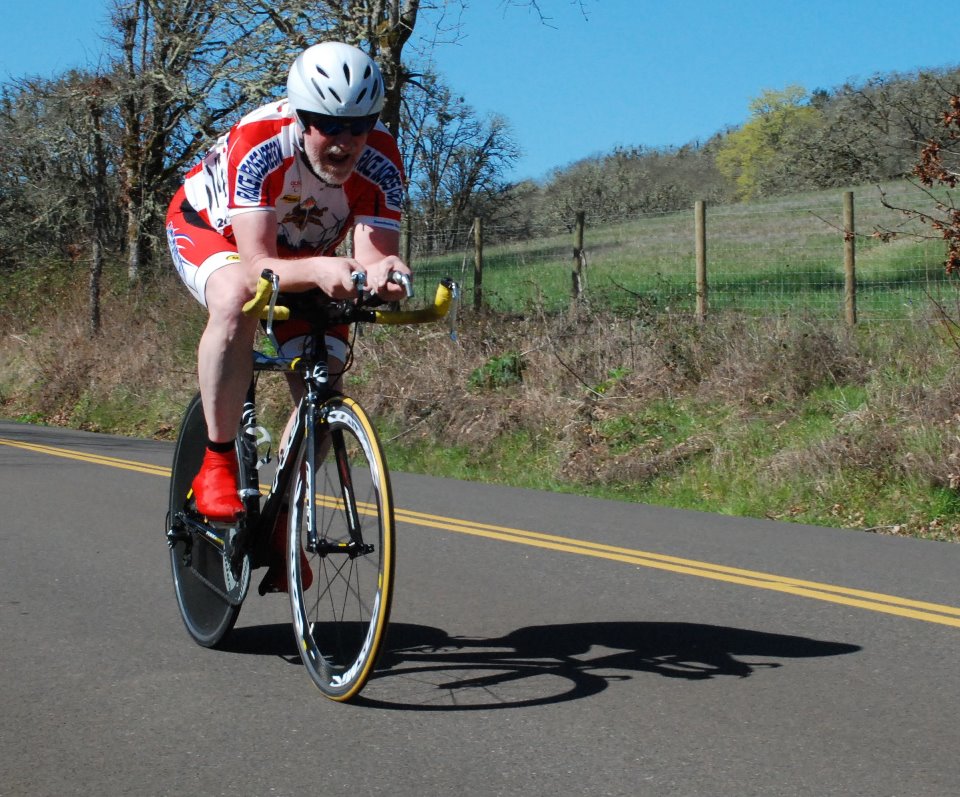 What a difference a weeks makes. The first As the Raven Flies Time Trial was just one week ago. The weather was cloudy and cold. The sun was to peek out from behind the low clouds, but it was never to be a warm day. The morning of the second Ravens Time Trial began with clear skies and very mild temperatures. No need for sweat shirts or leg warmers today!

My start time was 11:04. I followed my warmup routine and then headed down to the start line. My legs felt a bit tired but I was excited to be racing. Nearing the start line, I met Joanne who had just finished. Like her usual self, she was smiling. She warned me about the wind on the return leg and told me she had a much better time than last week.

At the starting line, I lined up behind Joe and Mark. These two are faster then I so I knew I would only see them after they turned around and were on the return leg.

Kevin counted down and I was off with a whoop and a yell. I intended to take the first hill easier than last week so I stayed in an easier gear until I reached the beginning of the hill and then shifted down quickly. I tried to keep my pedal speed up but was soon in my lowest gear. Grinding over the top, I hit the descent hard and shot through the traffic controlled stop sign at 40 mph.

Now begins the rollers. It was here that I was passed last week, but today I rode alone all of the way to the turn around point. No rabbits today.

On the return, I was passed twice. The first time by a speedy fellow who soon rode away from me. Then I was slowly passed by another and I able to use him as a rabbit. I stayed 25 yards behind hill, pacing him as we raced back toward the hill. The wind that Joanne warn me about seem to affect my rabbit more than me, but he was a small climber type and I knew that I would be dropped on the hill.

At the base of the hill we began our climb. I managed to stay with him for a while, but soon he moved forward away from me. By the time I reached the top, he was far ahead of me. I knew that I would not catch him on the descent.

I came out of the last corner flying toward the finishing line. However, coming toward me in my lane were a motorcyclist to the left and a wrong way cyclist on my right. I aimed carefully and shot between them adding to the excitement of finishing.

Glancing down at my cycling computer, I knew I had a good race and a personal record, which was a bit surprising to me as I feel I had been riding that well.

The Official resutls have me finishing at 35:38.47, a full thirty seconds faster than my prior best time. Once I came to a stop, Mark “Nutria” Newsome captured my oxygen debt state. 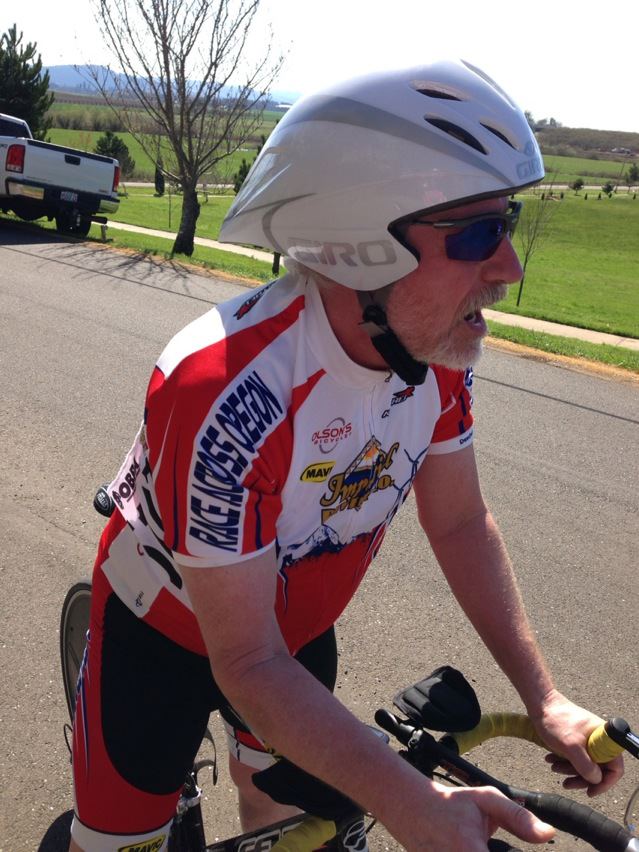 Unlike last week, I was not a couch potato; I got on my trainer and did my workout.

I really wanted to ride outside tonight, but the weather forecast was not favorable. It called for thunderstorms and I did not want to get caught in one. So, onto the trainer I climbed.

But I was feeling a bit tired tonight. My heart rate was about 10 bpm lower then Tuesday at the same power output, an indication that I need some rest. So, into the hot tub!

This was one of the hardest trainer sessions I have done in a long time. I did not know if I could make it through the 30 minute warmup!

But I did, and then I started the 15 session at TT effort. I counted off the minutes one by one. I think the hardest were minute eight and nine. After that, I was getting close to the end and I toughed it out.

My car is in the shop so I rode my bike to the Gym today.

My training today consisted of… 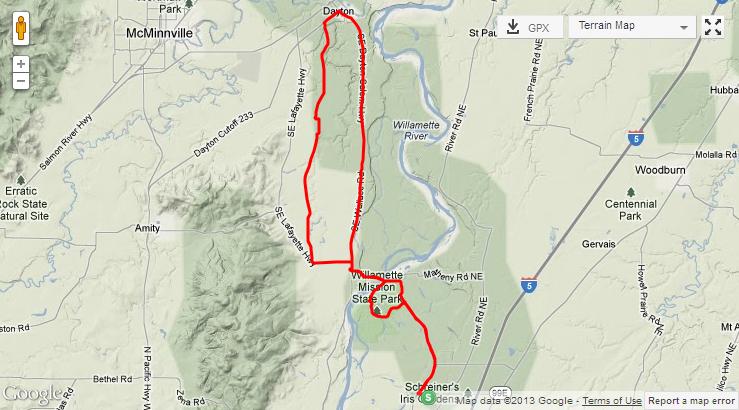 Decided to do an easy recovery ride even though it was not on my training plan – the weather was just too nice not to be out on the bike.

Met up with Mark and we rode up to Dayton on Webfoot Road against the north wind where we had lunch at the Block House Cafe. The weather forecast was a bit off; it was cooler than I thought it was going to be. Mark was surprised to see my bare, uncovered knees. However, once we started moving, we were warm enough under the mostly cloudy skies.

Food at the Block House Cafe was nice. They server breakfast all day but we ordered sandwiches and I enjoyed a latte.

The ride back to home was on Dayton Highway which was quiet and peaceful. We rolled along at over seventeen miles per hour helped by the tail wind.

Well, there is some flat. Maybe 100 feet from the starting line to the first hill. I started in my small chain ring knowing that is where I would want to be when I reached the hill. At the base of the hill, I could see my rabbit, the person who started before me, reaching the top of the hill. I reached down deep to work as hard as I could climbing that hill. I stood and stomped on the pedals trying to climb as fast as I could. I wanted to catch and pass that person. Finally, I crested and started down the other side. I coasted for a brief moment trying to recover from my hill climbing effort, but soon I was on the aerobars working hard.

After the first big hill, the route in never flat but rolls up and down. On one slight climb, Joe caught me and slowly passed me, but he did not pull away. When the inclined changed to a slight downhill, I was able to pass him back. But I knew I would never be able to stay in front of Joe, and sure enough he caught me and blew by. I managed to keep him in sight for the rest of the race, but he was always slowly pulling away.

Meanwhile, I was slowly gaining my my rabbit. But Tess is a strong rider and it took me six miles to be within striking (passing) distance. Just before the turn around, I got by her. However, I was still chasing Joe, and he was still within sight, but not very close as all.

Soon, I came the the big hill and worked my way up it. I knew that once I crested it was literally all downhill to the finishing line so I gave it everything I had.

My computer reported 36:17, but I started it before I was released at the starting line and stopped it after crossing the finishing line. I either was very close to my best time of 36:09 or just barely set a personal best.

A short workout in consideration of tomorrow’s time trial – As the Raven Flies.

You have been accepted to compete in the 30th Anniversary Furnace Creek 508 on October 5-7, 2013, “The Toughest 48 hours in Sport.” Once you complete the registration process, you will be part of a select group who will participate in this world-famous spiritual odyssey through Death Valley and the Mojave Desert. We look forward to sharing the experience with you!”

I felt really tired after work today. So I turned on the TV and started watching Milan – San Remo (I had recorded it from BEIN TV). Soon my eyes began to droop so I laid down on the couch. Then I fell asleep and slept through my assigned workout. I am such a couch potato!