I had two, yes two migraines today – both while at work. The first happened just after I arrived and was mild. The visual was minor as was the pain. However, the second migraine hit me at lunch and was much worst. As I write this, my head is trobbing and I will soon head toward bed.

First of all, the weather forecast calls for rain, and lots of it. 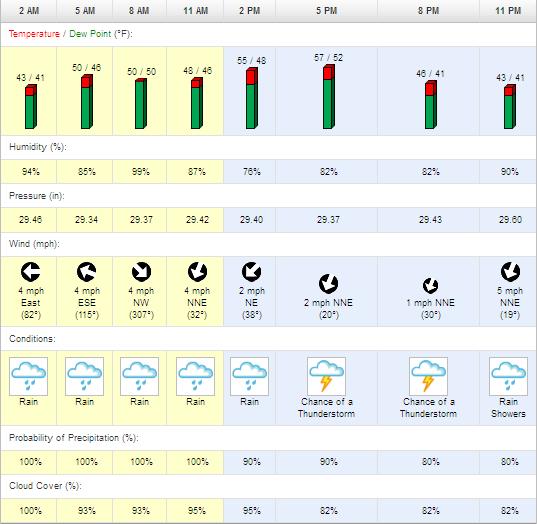 You would think that with weather like this, I would not be riding my bike. Well, I do have a rain bike, and the Oregon Randonneurs have a 200k Brevet schedule for tomorrow, so yes, I will be riding. The route is called the Molalla Foothills and there will be some climbing involved, around 7,000 feet which is one reason I will be riding. But the most important reason is because I need to get serious about my training for the Lewis and Clark 24 Hour Time Trial. The more I suffer now, the less I will suffer then. 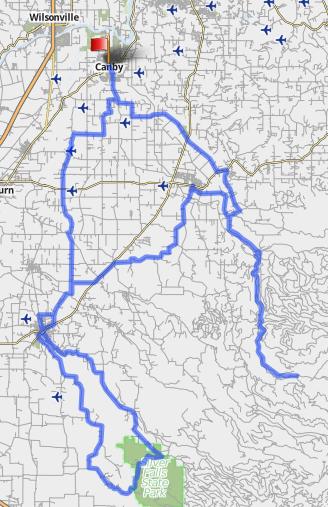 Joanne, Jim, Jean, Robert and I did the Windsor Inland Loop in the rain tonight. Not a hard rain, and not a cold rain, but water falling from the sky none the less.

This was a test ride for the new gearing on my Redline Conquest Ti. I installed a 11×32 cassette along with a new chain. After some minor tuning, I took it out on tonights ride. I must say that I am pleased with the results. It has a seriously low gear that will come in handy when I ride the steep hills on Saturday’s Brevet.

This is Oregon. It rains here. So, I worked on my rain bike today in preparation of next week’s 200k Brevet.

I decided to change the gearing. I replaced the 12-25 cassette with a 11-32 for the lower gears. This is a very hilly Brevet and I will appreciate the lower gears later in the ride.

A sunny March day which was very welcomed after a surprise snow storm.

I climbed on my LeMond wearing just a base layer, a short sleeve jersey and arm warmers. I left the leg warmers and the booties at home and I never missed them.

I decided to ride a porting of next week’s Oregon Randonneurs 200k Brevet. I know almost all of the route, but there was a section outside of Molalla that I have never been on.

As soon as I left the house, I met the head wind. And this would be something that I would fight all day long. I headed north to the town of Hubbard where I took my first stop of the day. I found a small market and grabbed some calories before I turned to the east toward Molalla. Of course the wind was now out of the east so I had no relief. I took another stop in Molalla just long enough to fill my water bottles at the local Library. Now I was on new asphalt.

I crossed the Molalla River and turned to the south, and the first time I did not have to face a wind. The road followed the river for miles gently climbing all of the way. The Brevet has a control at a bridge which was my turn around point. Returning down river I enjoyed the gentle descent until I reached S. Trout Creek Road.

I knew this would be a climb, but I had no idea how steep it would be. I learned. I dropped down to my lowest gear (26 x 25) and slowly turned the cranks over while my quads began to scream in pain. They hurt! They wanted to stop. They wanted me to walk. I did not let them get me off of the bike and worked my way up to the top. The climb is only 680 feet, but it is at 7.7% although at times I was lifting my front wheel with each pedal stroke. After about two miles I reached the top and the climb turned to rollers as I rode toward Sawtell Rd.

But the damage was done. My legs were toast. I was hurting and bonking. I suffered down Maple Grove Rd to Scotts Mills where I took an extended break. The rest of the ride was on pure force of charater and yes, back into the wind.

I finished with 100 miles, 4,400 feet of elevation gain and an average speed of just 12.6 miles per hour. However, my average heart rate was a very high 142 beats per minute proving just how hard I had to work.

I promised I would take it easy today. So, I quite the CTS TT workout early. My motivation was not because of my promise, but because I was tired!

I was released by my doctor yesterday, but with the words “Take it easy”.

I intended to, I really did. But sadly, I did not.

Just over two weeks ago, I had three Ti screws removed from my ankle. They had been inserted when I broke my leg in November of 2009. My doctor told me that this should not be a difficult procedure – they should come out easily. They did not.

It seems that the bone adhered well with the screws. In addition, the soft tissue surround the screws was not that soft. What should have taken five minutes took 45 minutes.

As such, my ankle is still sore, quite sore. But this does not affect my peddling; putting lots of force on the peddles does not bother the wounds.

The Salem Bicycle Club was offering two routes today, both to Silverton but one was mostly flat and one was not flat at all. The sky was cloudy and threatening, the temperature was in the low 40s F. and I rode the Litespeed, the bike with really fat tires on it. All of this should have directed me to the shorter, mostly flat route. I did not want to ride with the large group that was doing the mostly flat route, so I joined the smaller group of nine doing the not flat at all route.

The first big hill of the day was State Street out to Cascade Highway. I worked hard bringing my heart rate up to 163 at times and I was the third one to reach the top. Five of us regrouped and continued on as it began to shower. The next hill was Doerfler Road, a short and very steep hill. I was last. In fact, I was last for the rest of the day. The final big hill was Fox Road with inclines of 16% and greater. I was in my granny gear, a 26 x 25 and I spun up the hill working moderately hard.

On the descent into Silverton, I caught Alex and we stopped for coffee and snacks at the Silver Creek Coffee House. Since I intended to ride directly back to my house, I left Alex and rode back by myself, into the wind, a really fierce wind. It was a long way back from Silverton.

I will take it easy tomorrow – I promise. 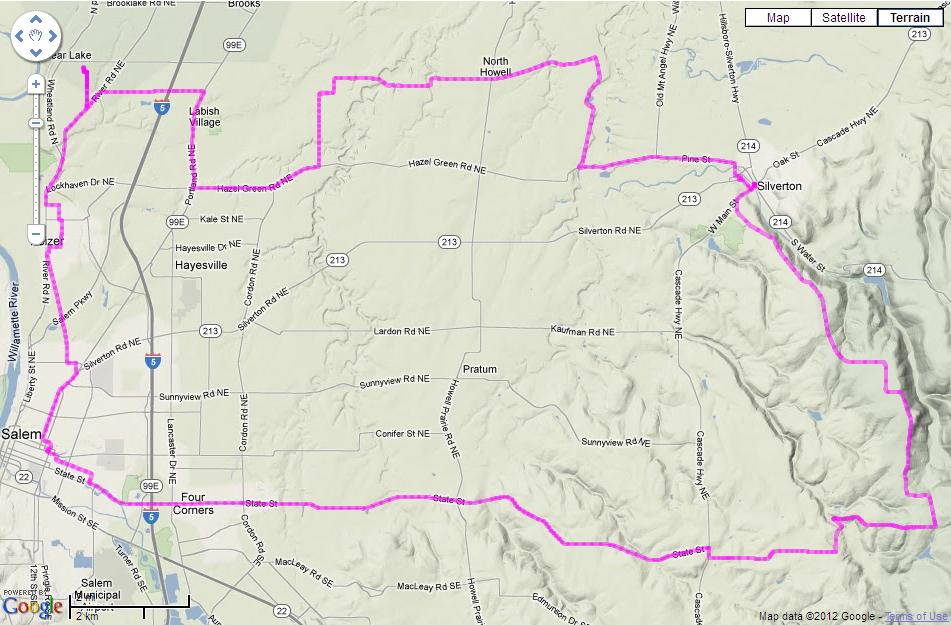 On Thursday last, I had minor surgery to remove three screws from my right leg. They were inserted there November 2009 when I broke both bones in my lower right leg. I was told that the procedure would take five minutes; it took 45 minutes. I was hobbling until Saturday, when I began to walk without pain. Today, I felt good enough to go out for a ride with the Salem Bicycle Club.

The route was through the Ankeny Wildlife Refuge, a mostly flat route but finishes with some rollers. I should have ridden it a bit easier, but I was feeling good and had a good friend along so I stayed with him. My average heart rate was in the Recovery Zone 60% of the time, so I did not hit it too hard.

I am looking forward to getting back to my training.